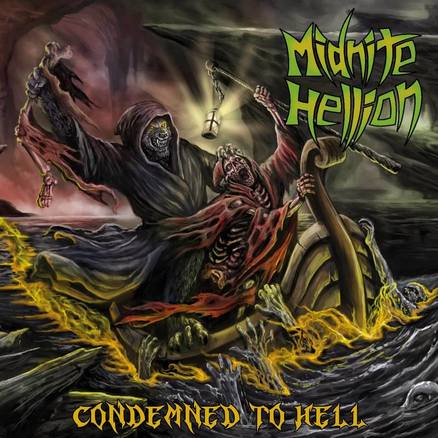 💿 Hi, it’s a pleasure for us to have on Hardrockheavymetal DREW RIZZO of MIDNITE HELLION well known Heavy Metal band from Trenton, US! Let’s start talking about the early days of the band..When is this all begun? Which bands have influenced you?

Drew Rizzo: Greetings, thank you very much for having us! The madness began on April 4th, 2011, when bassist/singer Jaron Gulino and I combined forces and decided to create a brand-new band of Heavy Metal. Together, we quickly composed new songs and had a brief stint with guitarist Alex Kubik before life pulled us all in different directions. You can now catch Alex on bass with Horrendous and Jaron with a numerous amount of bands, including On Top, who just put out a killer album called “Top Dollar,” and Mach22, who recently opened for Guns ‘N Roses and Bon Jovi. He’s currently touring the US with Tantric for the rest of 2017.
Bringing it back to Midnite Hellion, after regrouping and bringing in a new lineup, we released a demo cassette titled, “The Fever,” released on November 17th 2011 on Hels Trash Industries, and performing regional dates in the NJ/NYC/PA regions, including supporting Obituary at our demo release show, Artillery’s second US performance ever, Whiplash, Blood Feast, Deceased, and Morbid Saint at both of their first east coast performances in Brooklyn and Philadelphia respectively. The rest of 2012 was concentrated on releasing our EP, Enter The Unknown, on Else’s Metalecke, and touring the Northeast US with the legendary NY Death Metallers Prime Evil.
We spent majority of the following year on regional performances with legendary bands such as Diamond Head, Raven, Attacker, and one of my personal favorites, OZ, which was a show that I had co-promoted. The end of 2013 brought on a new release, our 7” single, “Hour of the Wolf,” which was our first offering with Witches Brew.
Touring in support of our new single was so much busier than we had ever imagined, and we are extremely grateful for that! It brought us to Chicago for the first time as part of the Ragnarökkr Metal Apocalypse festival. This event had us sharing the stage with two of my personal favorite bands, Grim Reaper and RIOT. Grim Reaper’s set was extra special as it was the first time that Nick Bowcott had performed with the band since 1987, and to the best of my knowledge, the only performance in their history that had dueling-lead guitarists. In addition, we had performed at the Starland Ballroom for the first time, which is the largest club in Jersey, with another favorite band of mine, OverKill. Combined with supporting Toxik’s first US show since their reunion and the rare but incredible Neil Turbin-fronted Onslaught Jersey date, we’re definitely both humbled and proud to have been a part of quite a few historical US concerts! Recently, we have concentrated on writing and recording for our upcoming album and beyond, plus performing out live as much as possible.
With regards to influences, Judas Priest is one of our absolute primary influences as well as favorite bands of all time. There is absolute perfection within each and every one of their albums, and to be able to have each of their songs sound unique yet have the quality of the Priest stamp is something very special, and something that we also strive for as well. For redundancy’s sake, all of the other bands mentioned in this interview are also influences, which is extremely cool that we were able to support many of our influences. In addition, early Anthrax, Iron Maiden, Rainbow, Helloween, early 80’s Slayer, Hallows Eve, and of course, 80’s Metallica, absolutely need to be mentioned as influences.

💿 On September 15th will be out your new full-length CONDEMNED TO HELL. We were really goin’mad listening to this work and reviewing it..Can you tell us somethin’about this platter and its composition process?

DR: Thank you very much, glad that you all are digging our newest offering!! We returned to Landmine Studios in Ewing, NJ to record the album and our friend, Len Carmichael, has provided his services for co-production, engineering, mixing, and mastering. He knows how to get the best out of us and we are very proud of the final results. The composition for the album itself began about two years ago, when I had a major spark in creativity and was able to pen a great amount of material in record time. I brought my ideas to our bassist/singer Rich Kubik and now former lead guitarist, Jeremy Moles, both of whom also brought in their ideas of course, and collectively, we finalized everything together and made a record that we feel is heavy beyond heavy.
We were fortunate to have quite a bit of material that was not used on this recording, and have thus already began the writing process for our next album!
We also felt that some of the older material needing some updating with regard to their recorded versions. Due to them being fan-favorites and featured in a lot of our live performances, we decided to re-record them for this offering as the other titles are now out of print. Always keeping our supporters at the forefront of our process!


💿 The album will be out via WITCHES BREW. Can you tell us somethin’about the relationships with this label?
DR: Witches Brew and I go back to about seven years now, when we established a working relationship during my time with my previous band, Horrifier, as we were signed to the label. I had hit it off immediately Cheryl, the Brew mistress, and we remained friends throughout the years. When she decided to restart the label after a brief hiatus, she approached me about seeing if we’d like to work together again, and it was a no-brainer instant affirmative response! She does a lot for her bands and is always coming up with new and creative ways to package and promote her releases, and she always uses top-quality materials for everything. Together, we have some killer surprises in the works for “Condemned To Hell,” so keep it locked to http://www. http://witchesbrewthrashes.de for more information and updates!


💿 The real “news” in music industry is the return of vinyl; What’s your feeling about this classic format and the current music business? 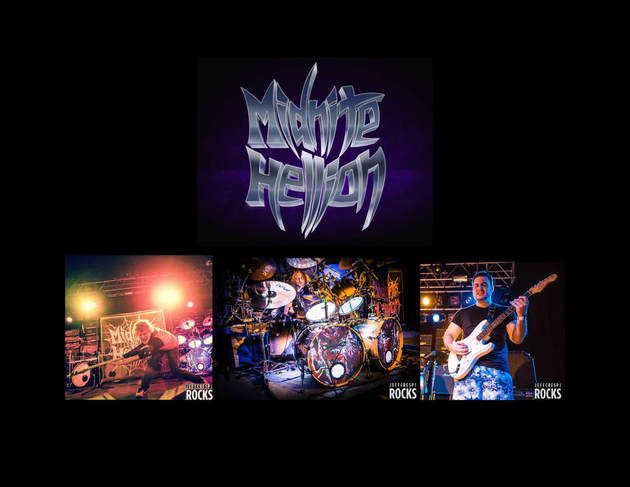 💿 Can you tell us somethin’ about your next live projects to promote the new album?

DR: We have already begun the cycle prior to the album release! However, our upcoming record release show, is slated to be one of the biggest and best yet! We will be returning again to the Starland Ballroom in Sayreville, NJ on Sunday, September 17th and will be supporting Exodus and Obituary, in addition to Power Trip and Dust Bolt. This concert is not to be missed, as we have a lot of surprises in store for everyone! More information about the event can be found at our website, http://www.midnitehellion.com.
While we still have a main concentration in the regional area, we were very pleased to finally visit both VA and DE earlier this year and are looking forward to returning soon! We have made it a point to feature a lot of new material in our recent live performances, but of course not everything as we do wish to have some surprises for our supporters!
After supporting some incredible concerts including Flotsam & Jetsam and Helstar, and returning to the Starland Ballroom earlier this year supporting UDO Dirkschneider and Yngwie J. Malmsteen, we are very ready to go full-speed ahead into the next phase of promoting “Condemned To Hell,” which will include a larger touring cycle. We are working on arranging touring more consistently next year and if the stars align correctly, we would be honored to be taken out on the road in support of a more established and larger band!


💿 Thank you so much for your time! See you soon on HARDROCKHEAVYMETAL !

DR: Cheers, thank you very much for taking the time to interview us and feature us in your publication!


Be sure to keep up to date on all things Midnite Hellion at: